Perhaps the single biggest tech investment area the last 5 years has been fin-tech. In Europe and the US, disruptors of everything from lending to foreign exchange have raised unprecedented capital to challenge banks and their kin: 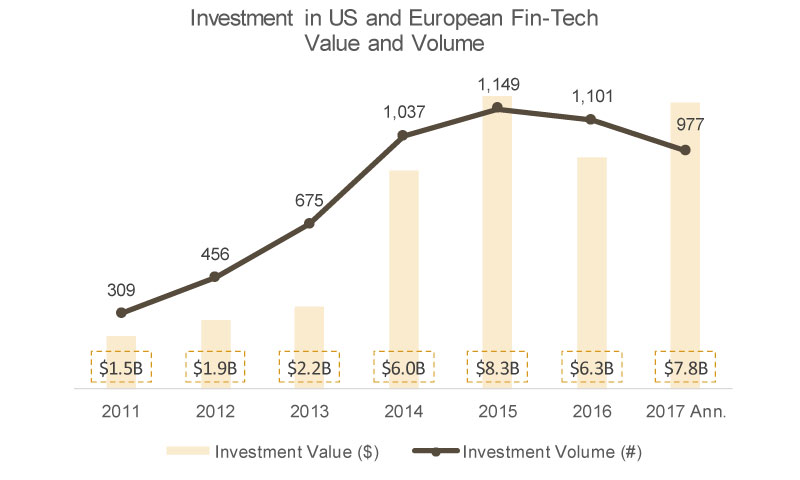 Conventional wisdom is this is a global phenomenon, and fin-tech companies are building significant enduring value.

I am not so sure, at least for European fin-tech companies. Here’s why:

The global stats paper over stark differences between the US and Europe. There are 3x the number of US fin-tech companies that have raised $20m+ rounds versus European players. The reason this is so important is that companies raising these size rounds are already aspiring to valuations of several hundred $ millions, if not ‘unicorn’ status.

The differences become even more stark when we look at fin-tech exits so far (both M&A and IPO’s). Among this group of US fin-tech’s there have already been 14 exits, about 10% of all companies funded in larger rounds. For a sector that has started only a few years ago, that is a very promising early sign of real value being created, and it’s in line with other emerging sectors we have seen over the last 20 years. The fin-tech sector is ‘working’ for investors in the US.

In Europe, using the exact same parameters, there has not been a single fin-tech exit, despite around 50 fin-tech’s being funded in larger rounds. The only ‘exits’ we tracked: Lendico’s distress sale to Arrowgrass and POWA’s spectacular flame-out and rescue.

WHY NO FIN-TECH EXITS IN EUROPE?

Where have the European fin-tech exits gone? I think there are a few key points:

We believe fin-tech M&A will gain speed the next 5 years. Many fin-tech companies will fail to raise still-larger rounds, and inevitably consolidation will begin to happen. The issue is that much of this exit activity will happen at prices far below what investors are putting on well-known fin-techs today.

This will be a great next stage for the European fin-tech industry, but far less attractive for investors who have ‘paid up’ so far to get into the best early stage fin-tech firms. Those investors often have paid a big price unrelated to revenue and profits, and are facing many more years to get to a less attractive exit than they expected.