Europe’s start-up ecosystem has grown by leaps and bounds in the last decade. Yet it risks being stalled by the lack of later stage financing for Europe’s tech industry, which has hardly budged in five years. The result is a yawning, and growing, chasm between the number of ‘grown up’ European tech companies eligible for late stage growth money, and the capital available in Europe to back them. We believe it’s already hurting growth prospects for European tech, while opening a hugely valuable gap in the funding market, which new funds could fill profitably.

US FUNDING MARKET IS BRUTAL, BUT CAPITAL IS AVAILABLE AT ALL STAGES

Our analysis suggests a clear ‘rhythm’ to the US funding market: 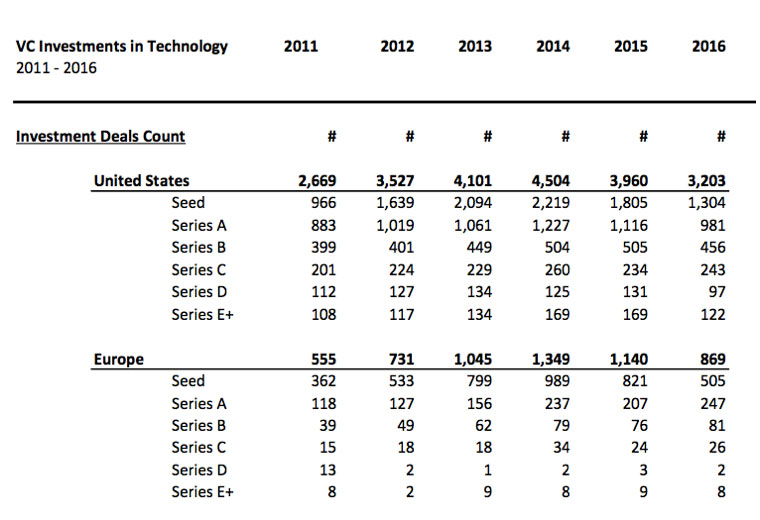 And lest you think this is a one-time or temporary phenomenon, unfortunately the table above shows the lack of later stage funding is a chronic affliction. There have been maybe 20, 30, or slightly more such rounds in EVERY year since 2011.

Put simply, the later stage funding market in Europe barely exists. Moreover, it is not developing, even as European companies are scaling fast, and internationally.

Why does this exist? We think there are several reasons:

We see European tech currently racing towards a proverbial wall. Over the next five years, many European companies will qualify for Series C rounds to accelerate their push to become global businesses. We believe they may end up having to grow much more slowly. Having spent years and billions to motivate European founders to take huge risks now paying off, we believe it is nothing short of criminal that the lack of later stage funding now threatens fundamentally that success.