The payments market is changing more rapidly now than ever before. Both corporate and individual customers no longer tolerate paying large fees for what are essentially commodity services, transferring money securely.

Fuelling this change, over $50bn of M&A and an unprecedented amount of capital has flowed into the global payments industry since 2010 according to a global review of corporate development activity in the payments industry by Magister Advisors. At the current run rate more than 10% of the entire payments technology industry will change hands in the next 5 years.

This wave of activity is being driven by several factors.

In 2013 and 2014, the M&A trend in the payments industry accelerated sharply. Since January 2014, there have been seven $1B + deals, for household names like Skrill (alternative payments vendor bought by Optimal for $1.7B) and less well-known players such as Micros (a POS systems vendor bought by Oracle for nearly $5B). In all, since 2010 more than $50B worth of payments technology companies have changed hands. 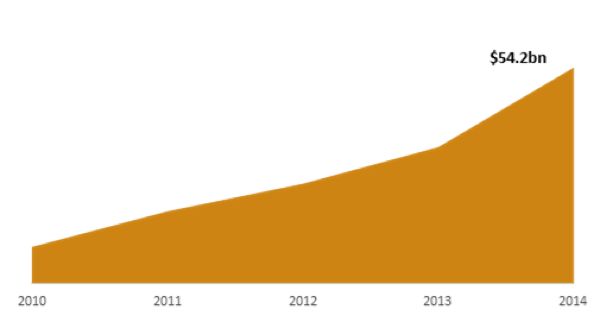 There are a number of drivers for this:

We are not yet seeing much M&A where incumbents acquire disruptive innovators growing quickly up from below. We think this demonstrates the classic innovator’s dilemma; those larger players with a significant customer base and high margins cannot tolerate disrupting their own businesses, even if it is already clear that new entrants are going to take greater share in the next 5-10 years. We have seen this film so many times before, from Kodak to Blackberry to Borders Books); now it is playing in the payments space. Incumbents are not going to learn from history until it is too late.

At the same time, the number of $10m+ financing rounds has multiplied in the last year. This year to May has seen the same number of rounds as all of 2013, demonstrating this is a highly dynamic market. 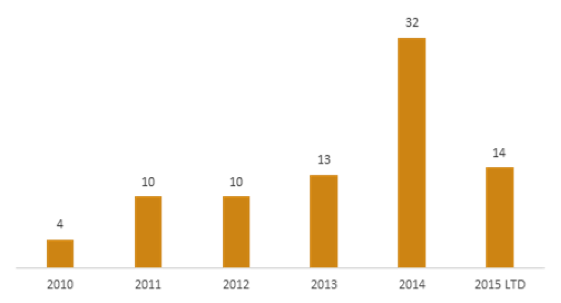 We see the two trends above, larger financings and greater M&A consolidation, as directly related. The greater the threat of disruption, the more intensive is the consolidation and diversification from the majors. Ultimately however much of the payments space is a simple commodity, sending money from one place to another, and as long as much of the sector demands fees of up to 2-5% (or even higher in specialist areas) for doing what is a commodity service, there will be no shortage of growth companies and investors willing to take a shot at this incredibly lucrative market.

After all, how many $1.6 trillion markets are there to attack?