Scandal could give fintech a bad name

The spectacular blowup of German fintech darling Wirecard AG, which has seen $12 billion wiped off its market value in three days, is making some old-school bankers feel good about themselves. “When will we wake up to what a fintech really is?” Daniel Baal, the head of French cooperative bank Credit Mutuel, tweeted over the weekend. When questioned why his company seemed so proud of its own forays into the field, Baal shot back that its homegrown unit wasn’t overvalued or overexposed in the media, but was part of a “solid,” regulated banking group.

This unseemly bit of corporate rubber-necking is pretty ironic, considering the recent history of banking losses borne by the taxpayer. Wirecard even toyed with merging with a flagging Deutsche Bank AG, according to my colleagues at Bloomberg News, but the German investment bank thankfully dodged that bullet.

It’s also tempting to argue Wirecard isn’t emblematic of fintech anyway. Industry insiders say they’ve long been confused about the mismatch between the German firm’s DAX blue-chip status and its lack of presence on the ground bidding for clients. Wirecard’s bombshell revelation of a $2 billion hole in its bank account has little to do with technology and potentially a lot to do with dodgy accounting, as a series of Financial Times articles over the past year had already pointed out.

But Baal’s barb shouldn’t be dismissed entirely. The enthusiastic groupthink that carried Wirecard into the DAX index in 2018 and valued it at 80 times earnings was inextricably linked to investors’ faith in the broader fintech story.

Digital payments is a business that’s meant to be easy to understand, less risky than banking and an entree into the booming market for e-commerce and mobile transactions. It has allowed investors to shun the complexity of bank balance sheets and give them a taste of Silicon Valley valuation multiples. For example, Adyen NV, which went public in 2018, trades at a price-to-earnings ratio of 187 (twice that of Netflix Inc.). The Amsterdam-based company is seen as a winner from Wirecard’s woes because it solves so many problems for e-commerce firms, from combining different payments platforms to data analytics. 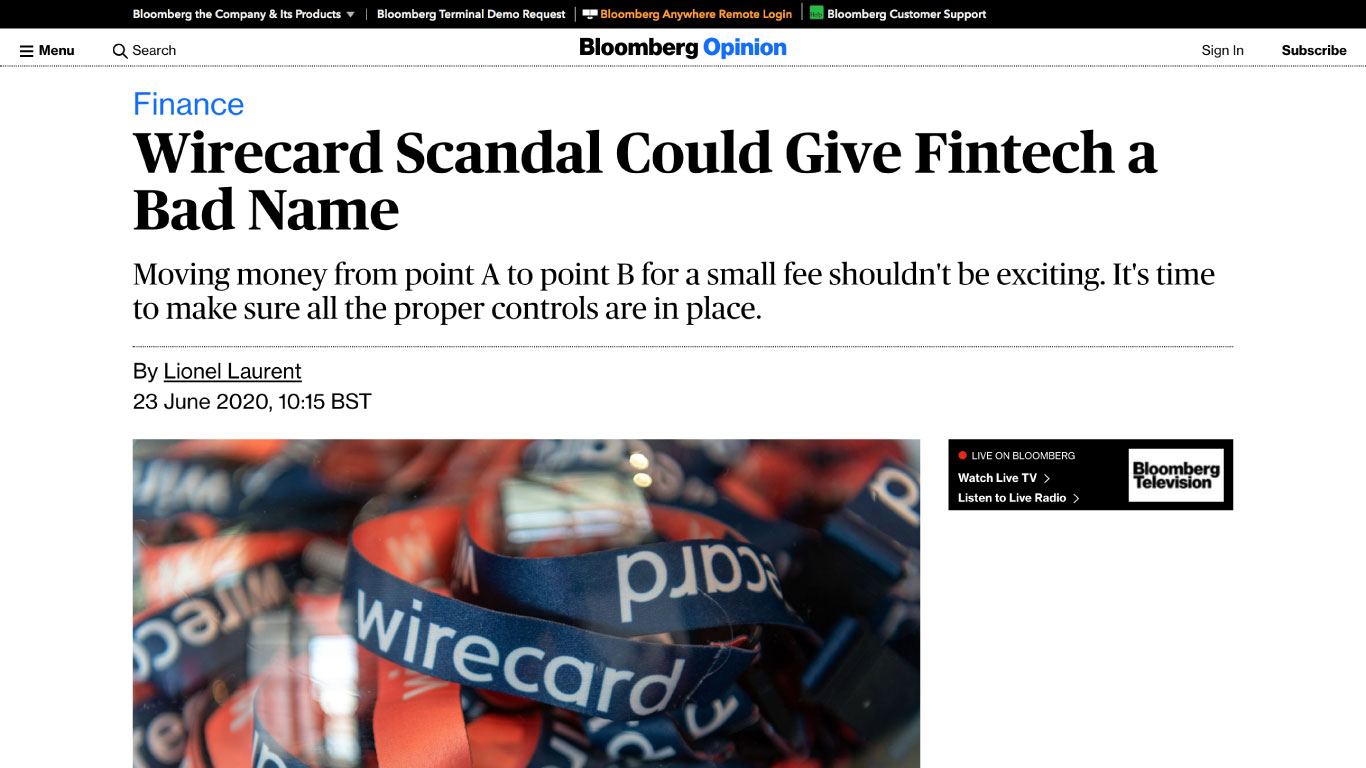 YetYet Wirecard shows the dangers of these types of companies falling between the regulatory cracks. Despite superficially being about moving money from point A to point B for a fee, investors and regulators seem to have been blind to what Wirecard’s digital payments business really involves and the risks it carries. None more so than the head of Germany’s national financial regulator Bafin, Felix Hufeld. At a press conference on Tuesday he actually said Wirecard was a “technology” firm as opposed to a financial one directly supervised by his institution. Wirecard says it has a full German banking licence. It’s a revealing slip of the tongue considering what went wrong on his watch.

Less risky clearly doesn’t mean risk free. Technology banker Victor Basta of Magister Advisors points out that the fintech industry combines a model of utility-like financial plumbing with a lean approach to compliance. The pressure to grow can discourage firms from taking a stringent approach to checking money flows for potential illicit activity, and from implementing other controls.

There are also hidden complexities in the business. Garen Markarian, chair of financial accounting at the Otto Beisheim School of Management, gives the theoretical example of someone buying a KLM airline ticket in Vietnam: A Wirecard partner might collect the money, transfer it to a foreign-exchange firm for a currency conversion, hand it to Wirecard to pass on to KLM for a fee and take a cut itself. This isn’t quantum physics, but it introduces execution risk. If internal controls aren’t strong, money can be lost.

This isn’t to say that all fintech firms are somehow on a slippery slope leading to a $2 billion cash hole. But start-ups are incentivized to focus on growth rather than compliance. Money-transfer app Revolut, valued at $5.5 billion, has had its own run-ins with regulators over internal risk controls. It has responded by hiring former bankers to join its management and compliance teams.

If Wirecard were to disappear tomorrow, the payments sector would shrug it off. But given how critical payments are, and the apparent risks, it would be worth considering whether the current balance is tilted too far toward low-cost efficiency and high-speed growth. It may be a good moment to reflect on how to make payments boring again.