African payments is fast becoming a ‘gold-standard’ for payments worldwide, and COVID is set to accelerate both the value and funding available to this segment across the continent. Since M-Pesa launched in Kenya, the proportion of Africans (particularly East Africa) paying by mobile has exceeded every other emerging region. In Africa, perhaps more than anywhere else, ‘mobile first’ has given way to ‘mobile only.’

Another attraction is, perversely, COVID. Digital businesses across the continent are normalizing the use of payment technology and money transfer in the informal economy (i.e. part of economy that is neither taxed nor monitored by any form of government) out of sheer necessity. To encourage the shift, leaders such as Kenya’s largest teleco, Safaricom, have implemented tactics such as a fee waiver for M-Pesa (East Africa’s leading mobile-money product), to reduce the physical exchange of currency and drive increased adoption. Across the continent there is renewed drive to reduce high reliance on cash. Meanwhile the data value is only now being leveraged, which sets the stage for creating another ‘value peak’ for emerging African payments vendors in the near future.

This is a perfectly ‘natural’ response for economies with large informal sectors, still-low average transaction values, and a large proportion of transaction for essential goods and services. The IMF, in its April 2020 World Economic Outlook, recommends countries with large informal sectors further develop their digital payments systems. These systems “may provide an opportunity to improve the delivery of targeted transfers to the informally employed.”

In the coming ‘renaissance,’ what are African payment players doing to differentiate and position themselves for the next stage?

African payments companies take two broad forms. The first is ‘pure play,’ generally based on Payment Service Provider (PSP) functionality. These vendors run a defined set of services and leverage partnerships to achieve scale. The second are hybrid vendors, who are more vertically integrated, usually offering a broader range of services off their core technology stacks:

The definition is important to distinguish as it impacts strategic direction of the company, which would also directly affect the set of buyers / investors for the companies.

Winning in African payments generally means winning the SME sector. There are very few true enterprise corporates, and a significant number of sole-proprietor businesses across all sectors. The fragmentation of the potential customer base is so much greater than in other fast-growing regions that many payments companies need to adopt a broader ‘ground game’ to target, connect, engage, and maintain a broad SME customer base, often across quite different markets. 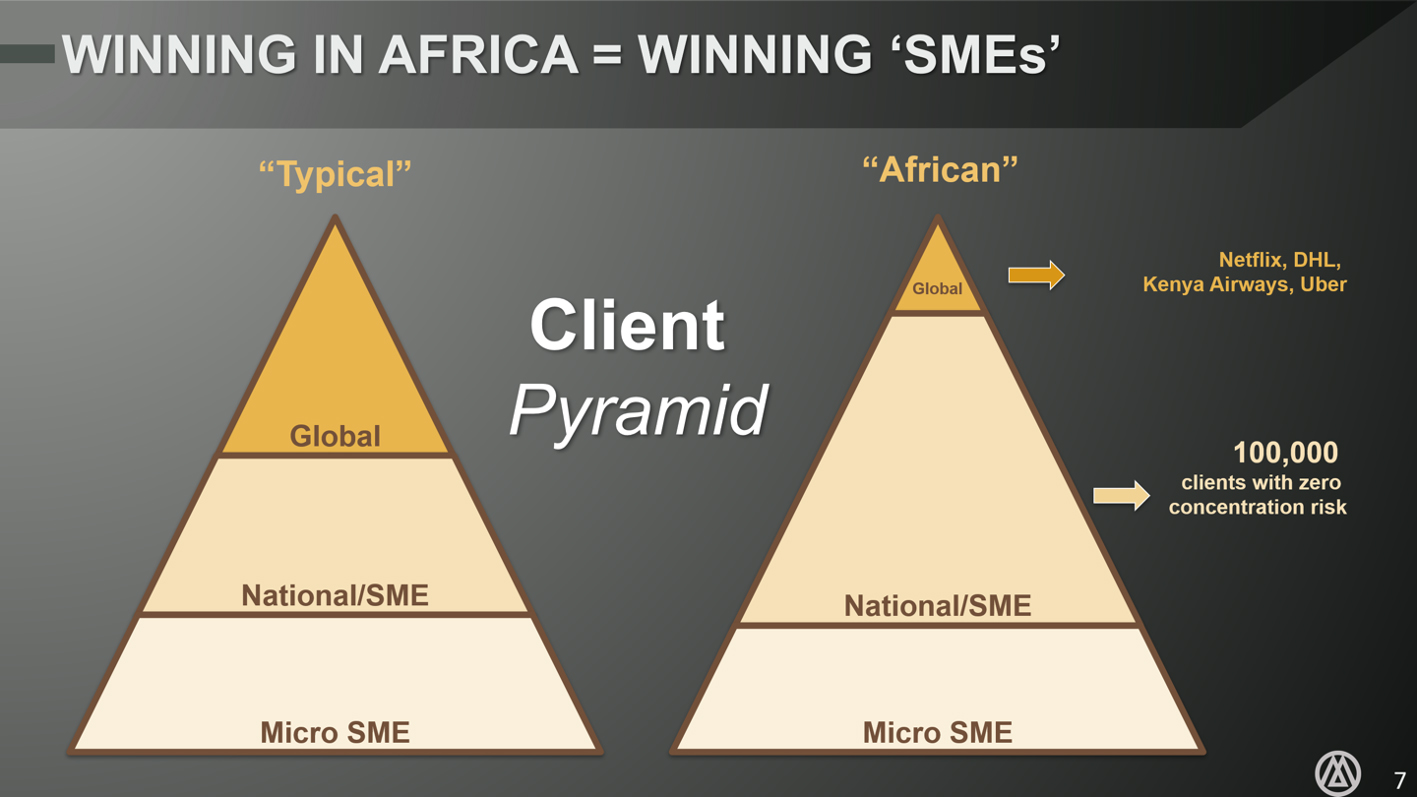 To effectively target SMEs, direct selling, agent distribution or agent networks are crucial for payment players, particularly in West Africa, due to the lack of infrastructure. Over the last 10 years, M-Pesa’s rise was closely associated with Safaricom’s dominance in Kenya (70% mobile market share), its broad and tied agent network across the country, and the focus applied to rolling out this service broadly. In West Africa, the continent’s largest prize, the market is deeply fragmented, ATMs are virtually non existent or not functional (Nigeria has < 20,000 working ATM’s), and for many of Africa’s 1 billion+ population agents of various forms are the main or only means of transacting effectively. Companies such as Paga and Kudi already demonstrate the requirement for, and value of, developing and maintaining a broad enough agent network on which to drive scale and reach.

Broader number of use cases

Creating and maintaining an agent distribution network is expensive. The ‘quid pro quo’ are a broad range of use cases enabled as a result, and the first-mover margins available to payments companies which can scale this way. Across the continent, agents are used for cash in/out, remittances, bill pay, payment for utilities and power, and the purchase of basic goods and services. While many of these remain cash transactions that are then converted to digital, increasingly payments companies are linking services to make transactions end-to-end digital.

Another benefit for creating broad based agent/direct distribution is that payments companies often can achieve higher margins on transactions than almost anywhere else. Its not atypical for take rates to be 2x+ what they would be in more competitive markets like India, and even at those levels they are still far below other alternatives. For example, the avg cost of transferring $200 via a bank transaction can exceed 10%, and in remittances many emerging digital players can charge 2x ‘normal’ take rates and still reduce the cost to consumers significantly vs traditional services such as Western Union. Digital works for payments companies, and for consumers, and the higher take rates are simply a function of the challenges and costs of reaching such a distributed, informal customer base.

In developed markets, data value is nearly always under-leveraged within payments providers. Many have built legacy systems that cannot easily adapt to actioning data insights to deliver value to customers, and increase margins significantly. An African ecosystem only now being built has the incalculable benefit of ‘starting with a clean sheet of paper’ in terms of realizing the value of data earlier and more completely. As a result, intelligent leverage of data and insights from an early stage could vault the strategic value of payment players to an entirely different level than current valutions. And since in the data monetisation game, ‘better data always beats better algorithms’, it is our view that many African payments companies are sitting on a large and growing ‘gold mine’ of proprietary insights on customer and SME behavior which can be leveraged in many ways to drive margins.

In time, many payments vendors will have greater insight into consumer spending habits to deliver targeted offers via mobile in a way which is simply impossible to envision in developed markets, where that ecosystem is already dominated by much larger incumbents. For example, both Square and Stripe have introduced and expanded significantly in the financing area. Square extended almost $700m SMEs loans per quarter in Q4 2019, highlighting the massive market potential. The point is that through the value of data and insights, many African payments companies can grow value well beyond pure payments value, because what they are ‘seeing’ are truly unique insights.

Because of structural inefficiency in Africa (‘reinventing the wheel’ is by definition required as there is no ‘wheel’ of infrastructure that functions successfully today in many markets) there is a degree of inherent capital inefficiency presumed to be required to get to minimum size to scale. Second, targeting SMEs and consumers is inherently more expensive than enterprise sales, with higher churn, greater cost to acquire and service, and a still-limited ceiling on realistic customer lifetime value.

We see that emerging African payments leaders go through different stages of capital inefficiency. For most, there is a multi-year period of greater inefficiency, as basic vertical integration is built. However, once companies pass a ‘tipping point’ of scale, rising take rates, and the leverage available from layering on additional services and use cases quickly turns that inefficiency into a highly capital efficient set of assetsIt is particularly important to distill, frame, and articulate these metrics as investors / buyers value a ‘perpetual motion machine’ that targets, acquires, services and ‘up-sells’ customers. Having a well-crafted set of unit economics also underscores the value of the existing and prospective customer base, and validates the ‘ground game’ execution strategy of local distribution across Africa. Buyers of equity can also rationalise paying more upfront because there is no significant $ required to subsequently drive customers to profitability. This transition from inefficiency to hyper-efficiency is a key element of story telling for African payments companies to sell equity at rising prices. 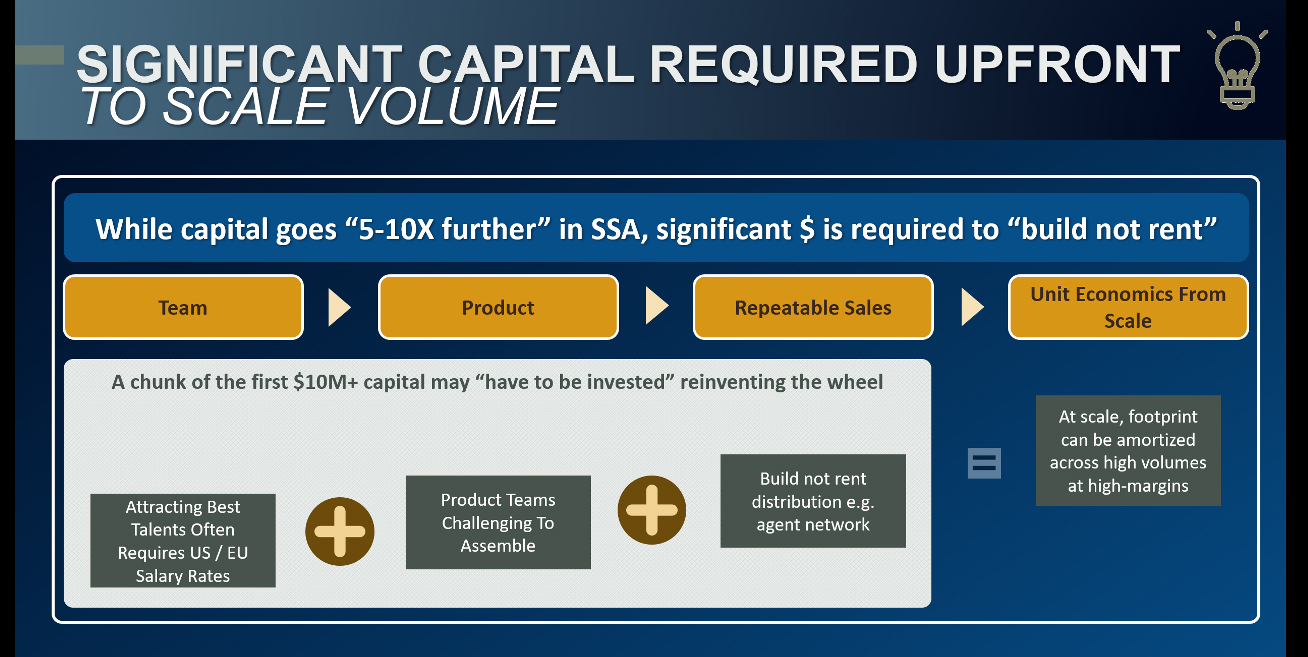 Africa presents maybe the biggest payment opportunity in the world today. For companies with some degree of scale, they have already done much of the hard work to generate long term embedded value, and only now are many starting to see the benefits of high marginal unit economics. With more capital, and compelling equity stories to tap the next generation of larger investors, we see several potential ‘unicorns’ emerging in the space in the next 5 years. M-Pesa and Interswitch are only the tip of the (value) iceberg.