Venture capital investors across the US and Europe are failing to take full advantage of high-value “exit windows,” according to Magister’s 15-year analysis of VC and private equity (PE) exit activity. Our analysis suggests VCs are significantly better at investing than exiting.

Here are some sobering stats.

VC investing (across the US and Europe) in 2010-15 has been both intensive and sustained. VC’s put more money to work, faster, than ever before: 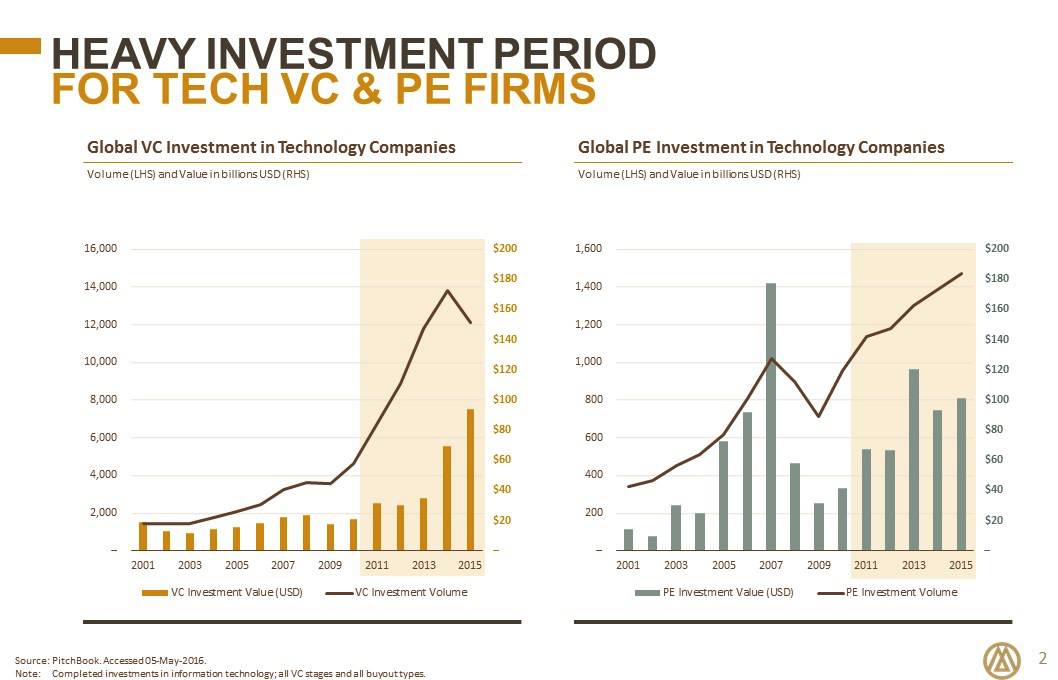 Both PE and VC firms also took advantage of the 2011-15 exit window to sell more companies than in the previous six years. 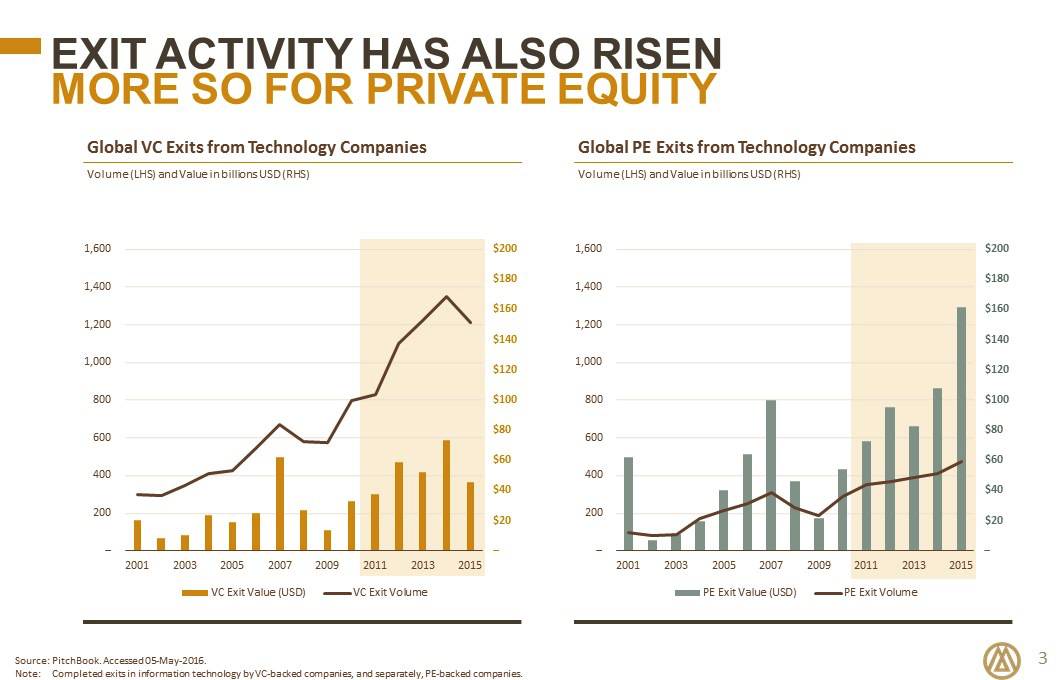 But VC and PE firms diverge significantly when we look at exits relative to investment activity. PE firms closed one exit for every three companies they invested in. For VC’s, the ratio was nearer 1:10. 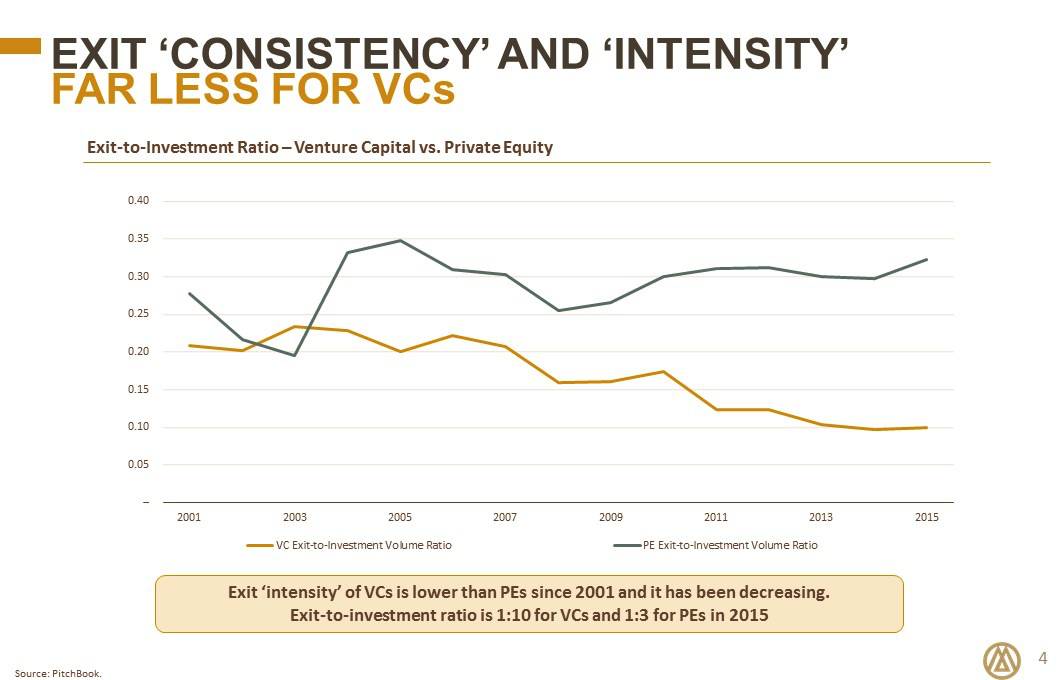 We would expect VC firms to put more money to work, for longer, than PE firms. But what is surprising is that the ratios actually diverge in a very “hot” exit market. Meaning VC’s slowed down their relative rate of exits, while PE firms sold consistently. Put simply, PE firms took full advantage of the higher prices available for their companies, and turned capital gains into cash. VCs in contrast, rode the wave of higher private company valuations, but have turned far less of those “gains” into cash.

Why have VC firms been so much less focused on exiting companies than their PE counter-parts? Relying on 25 years of exit work, and exposure to a broad range of investors in the US and Europe, we see the following reasons:

Fundamentally VCs focus on finding one or two “black swan” investments that will return their fund – the mentality of most VCs is to geared to those rare investments that 20, 50 or 100x the amount invested. These used to be called “black swans;” more recently, many were called “unicorns.” VCs just pay far less attention to their “very good, not great” investments, which can deliver very solid investment returns.

We think this is a flawed approach. Unicorns are still incredibly rare: maybe 150 “unicorns” in the world, probably far less when we adjust artificial valuations driven by highly-attractive preferred stock, compared to nearly 1000 venture firms worldwide. And a handful of US VC’s (and maybe 1-2 outside) have regular, early access to $1B+ investment opportunities; Sequoia, Kleiner and A16Z have 17, 15 and 15 unicorns respectively. The other 90% of VC’s have to generate 2-3x fund returns from more modest investment opportunities, that can still generate profitable exits. Yet it appears VCs are simply not focused enough on making this happen.

There is a lack of “exit discipline” in the VC community

The biggest difference we see between VC and PE is the discipline applied to the exit process. PE investors are “working backwards” from an exit from the moment they invest. The vast majority of VC investors think completely the opposite: build the company and the buyers will come. This company building mentality is absolutely core to successful VC investing, yet we think VC’s would benefit hugely from adding a dose of exit discipline into the mix. A more volatile exit market in 2016 demands even more, not less, exit discipline to deliver gains. VCs are simply not set up to help companies do this.

Recent VC gains from still-private investments will disappear quickly unless exited thoughtfully Many VCs have benefited from investments being “written up” in recent fundraising rounds; but data suggest valuations are starting to fall. As a result, VC paper “gains” are at serious risk of a market downturn. Our biggest concern is that many of those “gains” will reduce or disappear, making it much harder for VC firms to generate the real gains necessary to fuel the industry.

The answer: even more intensive, and disciplined, exit preparation, with a focus on preparing for an M&A exit given the near-standstill in IPO activity. This is even more important if high-value investments are at risk of needing significant future funding; the market’s appetite for putting $50m+ new money into heavily loss-making disruptors could fade fast.

We know this one’s controversial. 80%+ of all successful exits happen via M&A, not IPO. Yet the vast majority of VCs simply do not think through what’s required to fully prepare a company for M&A. The view of many is: when we are ready to sell, the Company will hire a banker. But by that time, there is little time to refine positioning, communicate successes publicly, and warm up buyers slowly to create real competition. Thoughtful exit preparation can add 30% or more to the exit value achieved, but it takes time, well before starting a sale process.

PE firms on the other hand, exit far more consistently via M&A, often with 60%+ of their exits to other financial sponsors, compared to c. 10% for VCs. We see far deeper and more consistent planning for exits from PE investors, with commercial decisions being driven as much by how they affect an exit as how they will affect a company’s future performance. Admittedly, it’s easier for PE firms to do this since they hold assets typically for shorter (3-5 years) periods of time than VC firms (generally 5+ years), but the difference is fundamentally one of mentality.

It is no question that finding and nurturing the next “unicorn” remains the highest and best use of any senior VC. Nothing else can return the fund, and its why many LP’s invest in VC funds. Yet for the majority of high-quality VCs, it may prove impossible to invest early enough in these large winners. An exit preparation mentality and discipline, coupled with the core VC skills of finding and nurturing winners, can deliver exceptional results over the next few years.

No question exits will become harder, not easier. But with a dose of structured planning, VC’s can continue to deliver exceptional results for investors. It is hard to think both like a VC and a PE investor, but the payoff for VC firms that can do this will be even greater in the next 5 years.