Germany just passed the UK in number of tech developers. A sharp rise in German VC funding will surely follow

The UK’s hammer-lock on leadership in European tech development has just been eclipsed for the first time ever by Germany. Moreover, Germany has set the stage for a tripling of venture money into its fast-emerging tech ecosystems. The European tech balance of power is shifting rapidly away from London and the UK, to Berlin and Germany.

According to Stack Overflow, Germany now has 840,000 developers, up nearly 20% from 2015. This puts it ahead of the UK’s 813,000, which is also growing much more slowly, and nearly twice France’s number. Germany’s tech talent pool is an overnight success borne from years of evolution; over the last five years Germany has grown consistently faster than the UK or France:

Long-term reinforcements are also greater in Germany. The population of German students studying STEM (Science Tech Engineering Math) is 3m, versus 2-2.5m in the UK and France. Crucially the UK is the only market where STEM numbers are declining. Considering Europe is 25%+ of world IT, and European software is growing 10% pa, a decline in STEM students in any EU tech market means very rapid un-competitiveness. 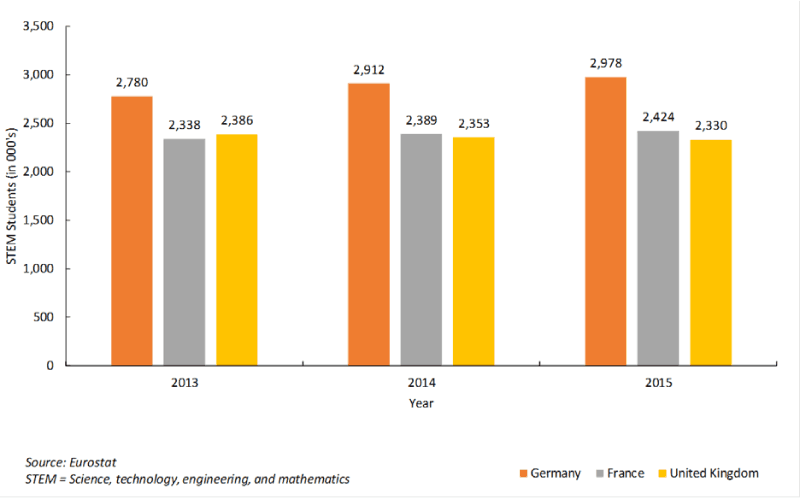 Germany’s sharp rise in developers is a combination of STEM students and immigration. With STEM graduates rising single digit %, a 20% growth in developers is only possible through an influx of programmers into Germany. While immigration headlines often focus on social costs, here immigration is clearly helping Germany achieve European leadership in this crucial area and setting the stage for the significant social benefits a more rapid expansion of tech clusters can provide.

In contrast. the UK figures are concerning and startling. More so since UK universities consistently outrank France and Germany in world rankings of computer science institutions. Oxford, Cambridge, UCL and Imperial regularly score in the top 10-20 worldwide according to QS or the Times Higher Education; only Munich’s Technical University makes any top-20 list. The UK is the last country in Europe one would expect a decline in STEM students, yet that is exactly what is happening. The “pinch” this creates for UK tech companies inevitably affects decisions about where to expand development functions.

Our argument is the size of the developer pool is not just an educational issue, it feeds rapidly and directly into the amount of funding supporting national tech clusters. Combining PitchBook funding data with Stack Overflow data on developer numbers, a “$ invested/developer” ratio looks like this over the past 10 years:

Germany lags for a variety of structural reasons. Many developers work in larger corporates, from Daimler Benz to Siemens to a range of vibrant Mittelstand companies. But with startup culture evolving in Germany, especially in Berlin and Munich, it is only a matter of time before more German developers work for quality startups qualified to raise money.

In 2016, UK tech funding hit $6B, more than twice Germany’s $2.5B. Our view is Germany’s tech sector will in five years double its amount of funding, based on the sheer depth of its talent pool, combined with more inevitable entrepreneur success stories. Longer term, as Germany’s talent pool outstrips the UK by a widening margin, venture capital in Germany (inward investment plus local funds) could reach $10B annually, four times current levels.

A Huge Tech Industry Is Possible For Europe’s “Winning Cluster”

The long-term prize is far greater. Tech clusters create local networks which scale dramatically. Comparing the ‘funding per developer’ ratio above to California’s shows just what might be possible in terms of total industry size and value. California has about 600,000 developers, less than the UK or Germany. Yet the maturity and scale of its local funding base has ramped its funding per developer from $25k to over $50k in the last ten years. 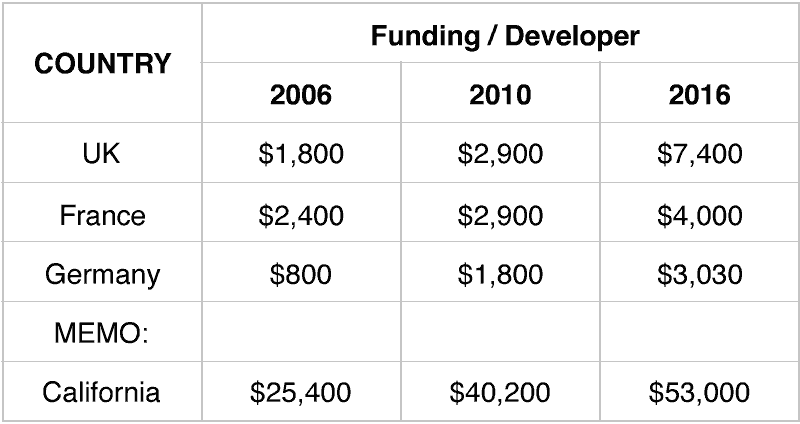 Naturally at such large numbers the value of this ratio reduces (California companies attracting hundreds of $ millions have extensive development operations outside California). However, it also shows that a large startup developer pool augmented by a large graduate talent pool, and magnified by high-potential immigrants, can create a funding environment 10x or even 20x Germany’s current size.

We believe another $10-20B+ of funding could gravitate to Europe’s winning cluster. Five years ago, most would have bet on the UK. Right now, that cluster looks to evolve in only one country: Germany.