US investors are helping to create the next wave of European unicorns and already reaping huge dividends. More broadly, US investors are involved in ¼ of all European tech financings, including seed and early-stage. Its no exaggeration to say US investors are fuelling Europe’s eco-system to an unprecedented degree.

Since 2010, the number of $1B+ privately held technology companies in Europe (the correct unicorn definition, excluding companies acquired or public) has risen from 2 to 20, according to CrunchBase. That’s still a fraction of the US’s c.100 unicorns. However, European tech is only 10-20 years old, and Europe has more developers than the US, a bigger ‘local’ population, and a fast-growing tech ecosystem (over 80 companies were created every hour in the UK last year). Many observers agree European tech has more than enough ‘raw material’ to fuel greater value creation the next decade than ever before.

US INVESTORS HAVE COMMITTED TO EUROPEAN TECH

European tech funding rounds have more than doubled in recent years, from ca. 500 in 2010-11 to 1,000+ in 2016-17. In this time period US investors have tripled their activity, and now participate in 25% of all European rounds, nearly 300/year. This is a huge endorsement of Europe’s potential, and a surprisingly large sustained commitment from US investors to Europe. 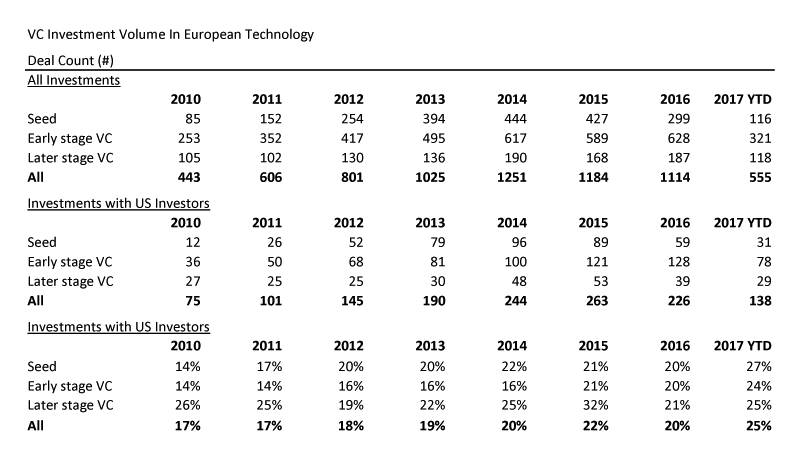 US FUNDS BEHIND MAJORITY OF EUROPEAN TECH WINNERS

Even more impressive, and surprising, is US investment in large late stage rounds that create future European unicorns. In 2017 US investors drove 65% of all funding; this has hovered between 50-80% since 2010. 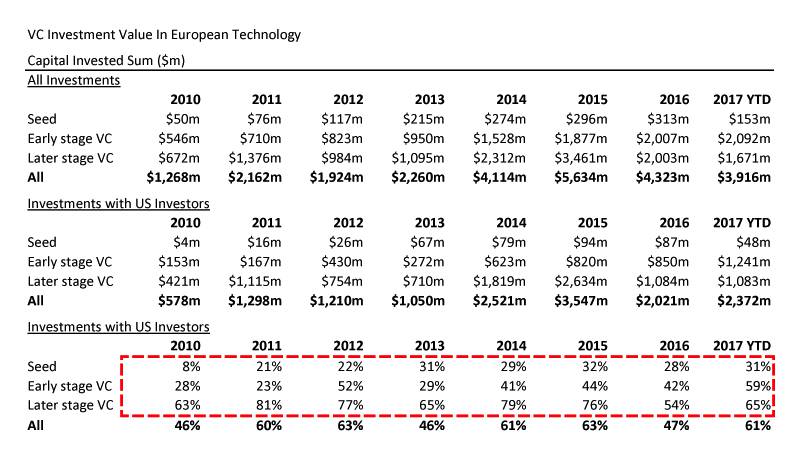 Since US investors are ‘only’ involved in ¼ of late stage rounds, this means the largest rounds which truly fuel future unicorns nearly always rely on US investors.  A good example is DeliveryHero, the Berlin food delivery business worth $5B+ post IPO. Insight Ventures drove their Series E and F rounds totalling $400m+.  Another example is flight comparison site Skyscanner; Sequoia invested in 2013, and the company recently sold to China’s C-Trip for $1.7B.

MOST ACTIVE LATE STAGE US INVESTORS

Our analysis shows a core group of 20+ investors who have driven US activity into Europe; our US investor ‘top 10 list’ is as follows:

US late stage investors have been diversifying into European winners for years. The reason for venturing far afield is partly because competition in Silicon Valley have raised late stage valuations to very high levels. Also, US investors have competitive advantages in pitching larger European tech companies; they can offer help 'over there,' adding more immediate value to an emerging segment leader competing from Europe. Finally, the reason for consistent investment into Europe is that it is now paying off handsomely; more and more European unicorns feature US anchor investors.

HOW I SEE THIS EVOLVING

European 'winners' will in future go to US investors first even for $25m+ rounds. Today US investors are always engaged in $50m+ rounds, it will just become more pervasive for smaller rounds as US investors deepen involvement in Europe, and grow in confidence from initial success.

More US investors will open in Europe. Even top-tier US VC’s including Kleiner and Sequoia will be tempted to establish local offices to access the best deal flow earlier. In parallel, more late stage investors (of the likes of Great Hill Partners, JMI Equity, and Bessemer for example) will follow TCV, TA Associates, Battery Ventures and Summit Partners and set up shop across the pond.

In Europe, we expect new funds to locate in Berlin – Post-Brexit, with economic and structural uncertainty increasing, we cannot see London attracting its historic share of these funds going forward. Also as Berlin’s startup ecosystem matures, more attractive investments will naturally ‘mature’ in Berlin, fuelling its attractiveness. Finally, as the second and third wave of US investors come on the ground in Europe, they’ll want to differentiate from their first-wave colleagues who nearly always started in London, and Berlin will be a natural and valuable point of future differentiation.

More US investors will raise dedicated European funds – 5-10 years ago perhaps only Accel, Summit Partners, and Benchmark (through Balderton) featured consistently active European-specific funds. In the next decade we expect at least another five late stage funds to raise European-specific funds. This will enable them to put more $ to work in Europe and take advantage of improving company quality and valuations that remain well below Valley prices.

Stepping back, despite all this activity US investors participate in only $1-2B of late stage financings in Europe; even if they lead all such rounds its unlikely they commit more than $1B/year right now. We confidently expect in five years this figure will triple; $3B+ of US funding will likely flow to European tech winners.

SoftBank’s $500m commitment to the UK’s Improbable a few months ago is only the beginning of a sharp rise in ‘jet fuel’ for Europe’s future tech stars.