In addition to aiding Africa, let’s fund its potential

In parallel African entrepreneurs are raising $500m a year to address many of these same problems. And they are also building companies for the long-term. Companies like Cloud Factory, that trains data workers, or Bridge, that provides curriculums to existing African schools, or Cellulant, which brings mobile money to over 10 African countries, are delivering on the same promises as aid. Today, however African growth companies have only 1% the resources of aid organisations ($500m vs $50b). Even a small increase in African growth funding would transform the entrepreneurial sector’s ability to help solve critical problems across the continent.

But let’s be more ambitious. What would it take for African growth companies to have the same level of resources as US entrepreneurs? The answer is only $6b a year, which is just over 10% of international aid. Put another way, a small fraction of the annual African aid budget could give entrepreneurs from Nairobi to Lagos the same level of resources as those in Palo Alto or Seattle. For this potential, the cost is incredibly modest.

Here is how we calculate this.

In 2018, African purpose-driven companies raised $500m in financing rounds of less than $100m, compared to $40b in similar rounds in the US.

But money in Africa goes much further. African GDP/capita is 1/15th of the US ($4k vs $63k), and after adjusting for higher urban productivity (2-4x) and even higher costs for technology sector workers, we calculate a rough GDP/capita ratio of 6:1, meaning $1 raised in Africa goes as far as $6 raised in the US.

Admittedly this isn’t exact (and we are comparing Africa to US GDP/capita that inludes Kansas as well as California), but it is a reasonable approximation.

Of course GDP/capita is only a rough guide; it doesn’t account for poor logistics, foreign exchange movements etc. But at least it is a rough guide of ‘how far money goes’ since money raised by Africans is typically used in Africa.

Funding for US growth companies (rounds of $5-100m) was $33-40b the last two years. As a side note, total US funding is much bigger because of mega-rounds for companies like Uber, AirBnB, and Lyft etc., which aren’t relevant for this comparison.

With a 6:1 ratio, new African growth investment would need to total about $6b a year to match US levels; today it stands at $500m. 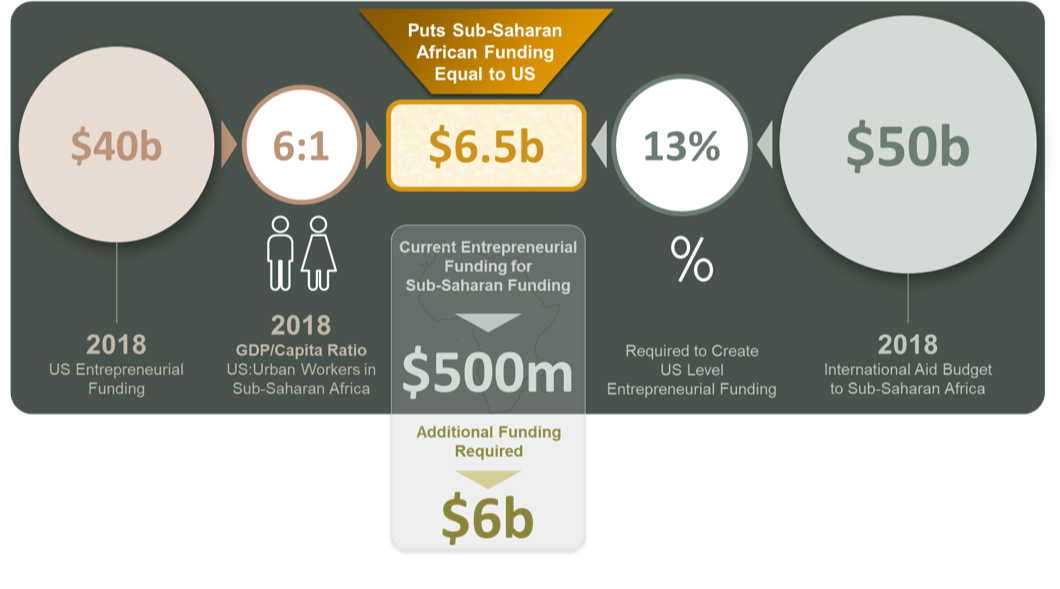 Growth companies can also deliver something aid finds harder to do. Aid usually aims for maintenance and stability, such as eradication of diseases, humanitarian aid in conflict areas, and delivery of clean water. The African entrepreneurial sector has the potential to go beyond that and jump-start the continent’s industrialisation. Long term industrial production is the largest ‘missing ingredient’ in sustained economic development.

It is also generally agreed that resourcing the private sector can be a more efficient and direct way of getting maximum ‘bang for the buck,’ since entrepreneurs have much more to gain or lose personally. China provides just one, perfect case study. Large aid organisations cannot be driven by the same economic calculus, but they certainly are driven to maximise ‘return on aid dollars.’ Better funded African companies will not just return a higher ‘aid rate of return,’ they will also create local wealth that compounds in value and impact, in a way no annual aid can ever possibly do.

And that is the ultimate point of the argument. The compounding effect of decades of private company growth investment can be truly transformational, as Africans build companies that employ youth and deliver local solutions to local problems. This can only magnify the world’s already significant aid efforts.

It is time to fund the acceleration of Africa’s potential, as a core part of aiding it.